Three of the most sacred icons in the United States are military personnel, Jews and Adolf Hitler. If you’re a U.S. citizen, you’re expected to salute the flag and support the troops and, by extension, any and all wars they fight in. You’re also expected to hate Adolf Hitler and worship the Jews.

As an American of German descent who served in the U.S. Navy and have been screwed by the Jews all my life, all I have to say is FUCK THE TROOPS and FUCK THE JEWS. 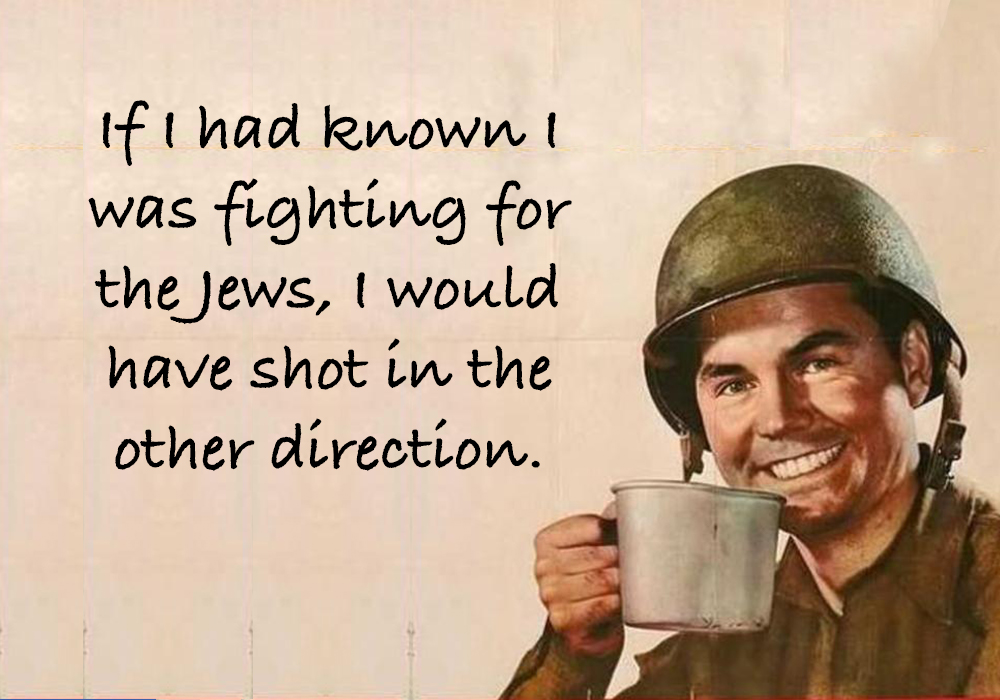 If you don’t care to speak out that strongly, that’s your choice. But keep in mind that our national debt has been increasing at the rate of about $1 TRILLION a year since 9/11, and most of it goes to our bloated military. And that pales beside the moral issues raised by an army of trailer park trash that never tires of fighting the Jews’ wars. As for the Jews, well you can start doing your homework @ Jews 101.

After the Jews hacked my Viva Hitler website, I upgraded it, then cloned it—twice. You can learn about a leader who was probably more dynamic than any pResident in U.S. history at VivaHitler.com, VivaHitler.us or Hitler.pro.

If you want to call me unpatriotic, racist, a NeoNazi or antisemitic, you can shove it. I despise the NeoNazis, and I think Hitler would have despised them, too. In fact, I think the NeoNazis are working for the Jews, who are the biggest racists and anti-Semites on the Planet.

My favorite park ranger pretty well summed up my feelings about patriotism:

A patriot must always be ready to defend his country against his government.
Edward Abbey

One thing I do like about the U.S. is free speech, though it isn’t what most people think it is. Moreover, the Jews have been plotting to overhaul the First Amendment, so be vigilant.

If you’re a right-winger who just can’t get enough war, I hope you get nuked by China some day. And if you’re a liberal who claims to be anti-war, though you just can’t stop repeating your mantra “I support the troops,” I hope you get yours as well. There are probably millions of people around the world who are praying that Israel gets nuked some day.

Thanks for visiting and have a nice day. 🙂